The category based risk approach of the anatomical-based SYNTAX Score ­– i.e. ‘low’, ‘intermediate,’ or ‘high’ SYNTAX Scores – to guide decision making between CABG or PCI, has been shown to be potentially misleading in a post hoc analysis of the SYNTAX trial.

Within this post hoc analysis, it was shown that low and high risk subjects existed in higher and lower SYNTAX Score tertiles, which appeared to have implications for the most appropriate revascularisation modality (CABG and PCI); e.g. there was a doubling of 3-year mortality in subjects with three-vessel disease (3VD)­­– with a low SYNTAX Score (<23) and a high additive EuroSCORE (≥6) ­– who underwent PCI compared to CABG.

The SYNTAX Score II was designed to improve decision making between CABG and PCI, by allowing for a long term, individualized risk assessment of patients with complex coronary artery disease. The SYNTAX Score II combines the anatomical based SYNTAX Score with clinical variables, that were shown to alter the threshold value of the SYNTAX Score so that equipoise was achieved between CABG and PCI for long term mortality. These variables included the presence of unprotected left main coronary artery disease, female gender, chronic obstructive pulmonary disease, age and left ventricular ejection fraction. 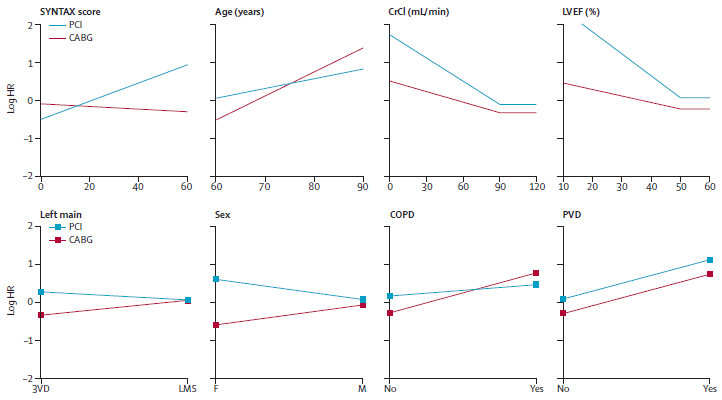 The SYNTAX Score II was developed in the randomized SYNTAX Trial (n=1800), and validated in the multicentre DELTA Registry (n=2891). Importantly the DELTA Registry was a multinational, non-randomised, all-comers registry, conducted in 14 centres in Europe, US and South Korea. The study population was heterogeneous, and included complex coronary artery disease ­–­ anatomical SYNTAX Score ≥33 existed in 30%, ­and 3VD in 26%, of the DELTA Registry.

During development and validation of the SYNTAX Score II, it was shown that diabetes did not improve decision making between CABG and PCI. These are findings that were consistent with a previous study of over 6000 patients treated with DES, where it was shown that the presence of diabetes minimally affected long term mortality predictions after PCI with DES, when age, kidney function and left ventricular ejection fraction were accounted for. Subsequent epidemiology/population based studies have further supported these findings.

By utilizing the individualized approach of the SYNTAX Score II, in contrast to the anatomical-based SYNTAX Score tertiles, a subset of patients with low, intermediate or high SYNTAX Scores were identified, that would have lower, similar, or higher 4-year mortality predictions for CABG or PCI. Specifically for 3VD, approximately 80%, 60% and 30% of patients in the respective low, intermediate and high SYNTAX Score tertiles of the randomised SYNTAX population would have similar long-term mortality between CABG and PCI. 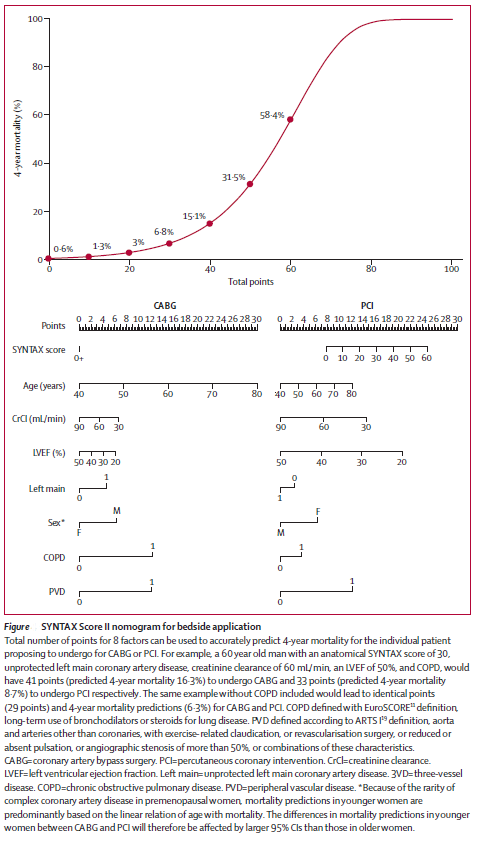